Last year was the first Dead Dad Day I did not spend with my mom and sister. This year marks another Dead Dad Day first: I will spend it completely alone, as I am in Chicago for a workshop. The family dinner and traditional margarita will need to wait until my return on February 12.

I kind of like that I am in Chicago for this occasion, the city where Brendan and I ran three marathons to raise money for Dad’s scholarship and diabetes research. It’s a fitting place to celebrate my dad.

To some new friends and readers, celebrating “Dead Dad Day,” much less calling it that, might seem crass. Why not celebrate my father’s birth instead of his death? (For the record, we do acknowledge that day, too.)

Here’s why: it was a beautiful death.

We talk about attending a beautiful wedding and meeting a beautiful new baby, presumably because both occasions are filled with love and families coming together and rejoicing. Can’t a death be that way, too? My dad’s was.

This past Christmas, my family and I saw the critically-panned movie Collateral Beauty (we all liked it; I cried more than I should have). I’m going to borrow that term here because I think it’s apropos—in the midst of the worst day of my life, I was surrounded by collateral beauty. I couldn’t see it then, but I see it now.

Though he was only 59 and his death was sudden, my father died in bed, hopefully with no pain, and definitely with no prolonged suffering. None of us had to watch his mental or physical decline. That was a beautiful gift.

My family and our network banded together that day – my sister’s future in-laws came to the ER that morning to check in on us. Amy, my Marble Jar friend, instinctively came to my house to cry with me. My mom’s sisters drove up from Connecticut after they got the call. My husband’s aunt came by with subs, reminding us to eat. My sister-in-law and her family brought pizza that night. My parents’ friends descended on the house that evening for what my sister and I affectionately call “the fake wake.” I don’t know how religious all of those people were, but it was the first time I felt what it meant to be “lifted up in prayer.” Their presence was a beautiful gift. 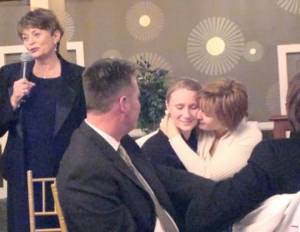 funeral, is a slightly grainy one from the collation after the burial. It is quintessential Pesola Girls. I gave my dad’s eulogy, and at the reception, many friends and family shared remembrances. My mother served as the evening’s MC, a role my dad typically played, and offered the mic to my sister to say a few words, and she lost her composure. My mom took the mic back to give my sister some time, and I wrapped her in my arms and reassured her she could do it. There’s so much pain in this picture, but it was also a beautiful moment of our new Pesola family unit of 3 figuring out our new world and new roles, and my cousin Lisa captured it perfectly.

I often think about my death. I have written my will and my obituary, and I’ve assigned people to my eulogy (you know who you are!). I could attribute this morbidity to surviving the sudden death of a parent at a young age, but really, Amy will tell you I’ve been talking about my death since I was at least 5—hey, it’s gonna happen sooner or later. I can only hope my death will be as beautiful as my dad’s and that my surviving family will recognize it as such…with time.

And so, on this 8th Dead Dad Day, I celebrate how my mother, sister, and I have navigated our new worlds since that day. I again thank all of you for lifting us up in prayer – on February 11, 2009, and today. And I toast my father and the death that brought me so much pain but also so much beauty.

Fakequity=Fake Equity. Fakequity is bad. It shows up as all talk and no action.

Happiness is all the rage.